How to Mine Bitcoins

Theladycrypto » Expert Area » How to Mine Bitcoins
Expert Area 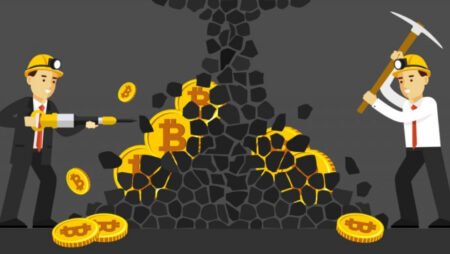 It is best to think of the production of Bitcoins as a reward for generating valid transaction blocks added to the blockchain. Once Bitcoins are mined, they can be purchased/sold on an exchange, used to buy/sell goods and wagered at Bitcoin casinos. However, most people struggle to understand the actual mining process that allows for the use of Bitcoins as a digital currency. In short, Bitcoin mining is a process that adds transaction records to the publicly accessible Bitcoin ledger referred to as the Blockchain.

The blockchain confirms each transaction. All users of the Bitcoin network are provided with access to the ledger. This ledger also serves the purpose of distinguishing valid transactions involving Bitcoins from fraudulent attempts to spend currency that has been previously spent, be it at online crypto casinos or elsewhere. In short, mining is a record-keeping process performed with the computers’ incredible processing power.

Even if you understand the basics of the Bitcoin mining process, you might still be confused about the blockchain. Do not be intimidated by the concept of the blockchain. It is best to think of the blockchain as being similar to how it sounds – a chain of connecting blocks. In the context of Bitcoin, the blockchain lists transactions that are generated in a specific range of time. Once a transaction block is formed, the miners direct it through a highly specific process.

A complicated math formula is applied to the block’s information, converting it into a much shorter group of numbers and letters referred to as a hash. Hashes are strings of randomized characters at specific lengths in idiosyncratic sequences generated from data sets of varying sizes. Blocks of transactions generate hashes yet altering a single character within a block of Bitcoin alters the sequence of the hash.

If anyone modifies a single transaction block, the hash quickly changes along with the ensuing sequences within the Blockchain. Therefore, Bitcoin mining and the resulting blockchain eliminates any potential fraud, ensuring the crypto continues to hold its value as an investment and currency.

Miners serve an important purpose for the overarching Bitcoin community. If it were not for miners, transactions would not be confirmed and there would be no means of ensuring transactions involving the cryptocurrency were actually legitimate. Bitcoin miners compete with each other using software designed for the mining of blocks. Each time a block is sealed, the miner has correctly generated the proper hash sequence, resulting in a reward. At the moment, 6.25 Bitcoin are rewarded for each block successfully mined. This value decreases in half with each 210,000 blocks mined.

As more and more coins are mined, the value of each increases due to the fact that the number of total Bitcoins is finite. As a result, the rewards provided to successful miners will remain the same in value or increase even though the number of Bitcoins awarded on a block-by-block basis will gradually decrease. The finite number of Bitcoins plays a large role in why this cryptocurrency currently holds value and will likely become accepted by the mainstream banking system in the months and years ahead.

Bitcoin mining takes place as either solo mining or pooled mining. Solo mining involves the miner attempting to form new blocks without assistance from other miners. The proceeds are held by that specific miner. Pooled mining involves the use of multiple miners’ resources to pinpoint blocks at a higher frequency. The proceeds are shared between pool miners based on the level of hashing power contributed.

Solo miners usually rely on bitcoind to obtain new transactions through the network. The mining software polls bitcoins for transactions with a RPC known as getblocktemplate. This tool lists all of the new transactions along with the public key where the coinbase transaction is transmitted.

Alternatively, if a hash is uncovered beneath the target threshold, the hardware used for mining returns the block header along with the nonce to the software. This software combines the block and header, transmitting the fully completed block to bitcoind for broadcasting on the network so it can be tacked on to the blockchain.

How long does it take to mine 1 bitcoin

When the subject of Bitcoin mining is raised, some people quickly interject, stating that the mining of this cryptocurrency requires an abundance of electricity and time. After all, that more electricity is necessary when an especially powerful computer is used for mining. Take a moment to consider the computing hardware’s consumption of electricity in terms of watts prior to attempting to mine Bitcoin. Consider how this power consumption will increase your energy bill. After all, if your energy bill spikes more than the value of the coins you mine, it is a losing proposition.

Experienced Bitcoin miners rely on energy consumption and hash rate numbers to determine the number of hashes provided in relation for each electricity watt used by the computing hardware. This calculation is as follows: take the hash count and divide it by the total number of watts. Furthermore, there are also web-based electricity pricing calculators available to estimate whether mining Bitcoin is worth it considering the inevitable increase in the monthly power bill.

Million years to mine 1 Bitcoin

In short terms, mining a Bitcoin is based on the probability of a random event occurring.

Bitcoin is based around a so-called proof of work which is a very challenging mathematical puzzle that a computer has to complete. It’s hard to find a solution and it take time, but very easy to verify if a random solution is correct, so the computer tries randomized solutions until it hits one that works and then submits it to the network.

For a normal PC It would take several million years until it could mine single Bitcoin. Mining without specialized hardware today is basically meaningless; even solo mining is starting to die out in favor of pooled mining.

It is now possible to perform Bitcoin mining on the cloud. This means you do not have to buy uber-powerful computing hardware and manage the mining process on your own computer. Instead, let the cloud do the mining on your behalf. Cloud Bitcoin mining is centered on buying mining contracts that empower miners to rely on shared computing processing power provided through data centers in various locations.

The Profitability of Bitcoin Mining

Bitcoin mining has the potential to prove quite profitable, especially if it is performed securely in a cloud. However, some of those who rely on their own home or business-based computing power have the potential to lose money if their mining operations do not generate Bitcoin worth more than the inevitable spike in electricity costs.

Those who invest in massive Bitcoin mining farms stand the best chance of making a profit. Furthermore, individuals with access to low-cost electricity also stand to make money from Bitcoin mining. If you are interested in Bitcoin mining, perform your due diligence and your Bitcoin mining investment just might pay off more than you ever imagined.